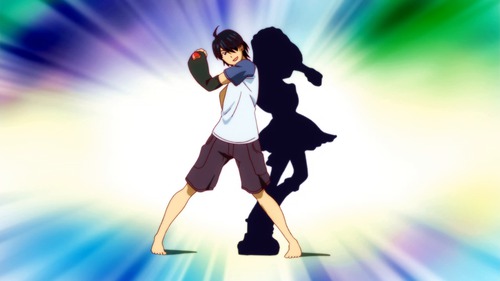 Observations from episode 8 of Nisemonogatari:

This is from Look Around You season 1, episode 5 (“Sulphur”). Subtle shifts in the blue background really killed compression for this image, so I ended up treating changes in color value of less than 7 percent as no change for transparency purposes.

From Working’!! (season 2), episode 13. Playing around with ordered dithering, which really does help with the file size at the expense of fairly visible patterns.

Slow decay, or playing around with Inkscape’s path simplification tool. “13” was simplified as part of a text node containing all the numbers from “01” to “13”; the other numbers were then deleted. The same goes for “12”, “11”, and so on down to “01”, which was simplified by itself. As more discontinuous paths are selected, the shape changes more and more radically as the algorithm attempts to beat the entire selection into something smooth.

Patema Inverted (Sakasama no Patema) "Beginning of the Day" PV

So Yoshiura’s new film is getting a prologue, to be released on Nico Nico Douga sometime this weekend. This is the trailer for that short Web series, which I guess makes it a preview of a preview. How recursive.

It looks like Patema’s going to take Pale Cocoon’s endless underground aesthetic and turn up the grungy desolation a few notches. Most of the sci-fi elements seen there and in Time of Eve seem to be absent, though (note the utter lack of minimalistic transparent displays). It’s just a big world waiting to be explored through innocent eyes.

Edit: I use the phrase “endless underground aesthetic” a lot.

Edit III: Correction above. Here’s the Nico Nico channel, by the way.

I was on duty at the listening post when the anomalous messages…
When the signal does come through, it’s already been through so…
@central-avenue, “bad road signs explained”: Two points: …
Something's not right here
Sakasama no Patema
It that easy is not
Araragi dodging sharp projectiles like he’s in medieval France.…
UI-related things I'd like to see in (more) visual novels
endoplasmic ridiculum n. the cellular structure responsible for…
An anonymous correspondent writes: If you had to be an anim…
@mnxmnkmnd writes: But the undefined names! Isn’t that more…
@spinor writes: What is the true nature of the Evangelion? …
Takanori Aki of Good Smile Company and Hiroaki Matsuura of Sanz…
Positive things I have to say about the first episode of the ne…
Tsuritama
Many [Tumblr users and readers] have fallen for the conspiracy …