The first thing we do, let's fire all of marketing

I love anime with real depth. You think they’re just about one thing, but they end up being about so much more. Take Sankarea. At first glance, it looks like a generic wish-fulfillment romance, except With Zombies™. In fact, that description is why I initially skipped out on the show. But it’s not just that. In fact, it’s not even mostly that.

No, see, it’s actually about how much one incredibly creepy, out-of-touch man can screw things up for everyone around him.

I’m being a bit frivolous, but Sankarea really is a show that adds up to more than the sum of its advertised parts. Much of this, of course, is due to the fact that the show’s primary strengths were left out of the preview blurbs. True, it’s hard to sell cinematography (a highlight of the series) unless you’ve got a big name in the director’s chair. But early descriptions of the show barely even hinted at the core of the story – a struggle for normalcy and freedom from an asphyxiating family situation – and placed a tad too much emphasis on the whole “zombie” thing. Given those low standards, it’s perhaps unsurprising that Sankarea exceeds them, but even ignoring that handicap, the show provides its share of compelling drama. The last episode is clearly leaving a lot of room open for a second season, which I can only hope will retain the same atmosphere. 7/10. 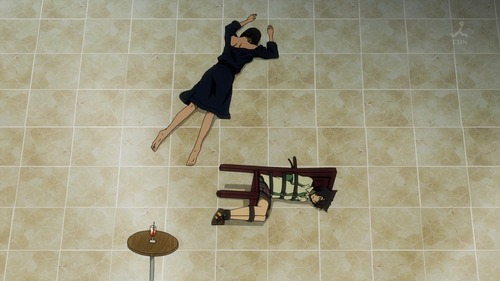 All the Small Things: Cinematography in Sankarea

I almost didn’t pick up Sankarea, but I’m very glad I did, and the show’s direction is part of the reason why – it’s taken an otherwise unremarkable premise and lent it an unmistakable atmosphere. It turns out director Shinichi Omata (working under a pseudonym) is an old hand at SHAFT now working on his own projects, much like Shin Oonuma, and you can see some of the techniques common to Akiyuki Shinbou and his protégés here played in a more subtle, but still effective, manner.