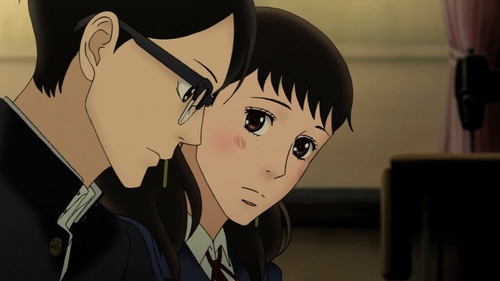 Kids on the Slope, briefly: Started out well, hit some rough patches around the ninth or tenth episode, never really recovered. (Plot details follow.) There were some moments in the middle of the series that recalled the swirling romantic complications of Honey and Clover, but once Yurika and Junichi left the scene, things got a bit too rushed and melodramatic for my taste. The school festival happened, Sentarou got in a car accident, and then eight years passed by – and all the while the main relationships between Kaoru, Sentarou, and Ritsuko seemed to go virtually nowhere, or even regress. I do dislike “x years later” endings in general, but this one in particular just seemed too easy. On the positive side, the music was (of course) good, and coupled with the best animation of “live” performances I’ve yet seen. Again, a series that’s hard to fault on the technicals. Probably a solid 7.