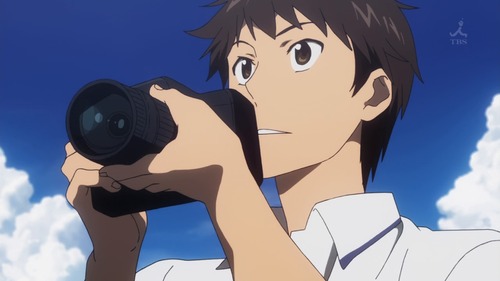 Let me be blunt – my near-total inability to drop anything, no matter how repulsive, is about the sole reason I’m still watching Photokano. I was lured in by its billing as Amagami’s spiritual successor, but it’s basically one in name only. Photokano’s protagonist regularly bumbles across the line separating cluelessness from sleazy malevolence, and the cinematography happily invites the viewer to do the same, as blatantly suggestive shots of random girls are dropped in at a rate that implies the animators had to meet a minimum fanservice quota. The love interests themselves get little chance to become anything more than undifferentiated clichés, given that their stories are crammed into one- or two-episode arcs, and show none of the quirky charm that each of Amagami’s heroines exhibited in spades. Even the mischievous comic relief that Kana Asumi so well delivered with every “nishishishi” is gone, replaced by a gaggle of idiotic clubmates that serves as a single, repetitive, unfunny joke. I won’t even get into how Photokano depicts neither the art nor the technique of photography remotely accurately. Just know that – especially if you’re, like me, a walking manifestation of the sunk cost fallacy – the show isn’t worth it.

A sample of proposals for anime SI units

Protagonist density: The Tachibana, named after Amagami’s lead, who incidentally has the density of a block of lead. Marked by a general obliviousness, especially when it comes to romance, and a tendency to think with the wrong head.

Incredulity: The Araragi, for Bakemonogatari’s main character and reaction face generator extraordinaire. This could have been named for a good few of Hiroshi Kamiya’s other characters, really.

Moeblobbiness: The Asahina, for Haruhi’s mascot. I don’t think I need to explain how this one works.

I sincerely apologize to everyone who thought I was above turning this place into yet another GIF log.

The Amagami SS+ opening lays on enough vocal filters to make me think GLaDOS is on the mic. How does anyone consider this listenable?