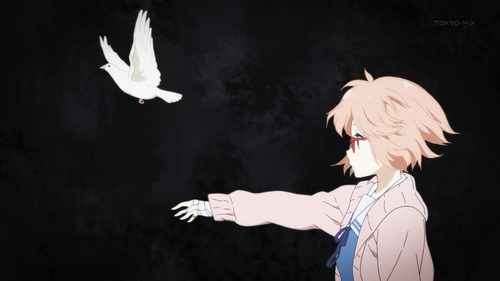 I watched the first episode of Beyond the Boundary (Kyoukai no Kanata) today, and I liked what I saw. It’s entirely too early for me to draw general judgments, of course, but so far director Taichi Ishidate has acquitted himself well in building a subdued, slightly off-kilter supernatural mood that draws the viewer in. But that’s not what I really wanted to talk about – I really want to highlight Risa Taneda, who here lends her voice to Mirai. Most will know Taneda for playing From the New World’s main protagonist Saki, where at points her vocal performance singlehandedly carried the show; she’s also starred in a handful of comedy anime this year, Yuyushiki and Kiniro Mosaic among them. It’s no mean feat that she sounds right at home no matter where she is, especially given that her characters seem to have very little in common with each other. The material she’s been given in Beyond the Boundary’s first episode isn’t particularly strong, but it does serve as further evidence of how she can adapt to seemingly any role. I look forward to seeing what lies in store over the next few weeks, because it’s looking good.