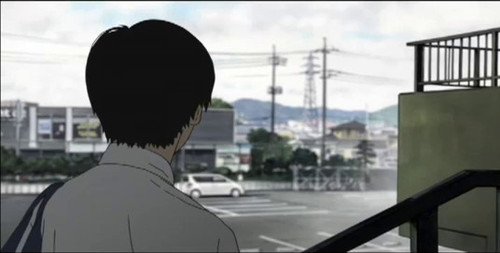 It’s clear from even a cursory viewing that a lot of talented people worked on The Flowers of Evil. The evidence of their presence is everywhere, not least in the show’s excellent background art and music direction. Even the much-maligned decision to use rotoscoping as the basis of the show’s animation at least indicated a willingness to think outside of the box. Unfortunately, The Flowers of Evil seems entirely too content to let these talents go to waste, squandering them with a chaotic, poorly-thought-out execution that too often strays into absurdity. Sure, I know there are production reasons for having a 19-year-old actor play the middle-school-age protagonist struggling with peculiarly middle-school-age problems, but they hardly make the end result any less bizarre to watch. On top of this, the show’s core philosophical conflict, the one that you would hope would be compelling enough to justify the series’ persistently self-serious, humorless atmosphere, is delivered with the subtlety of a brick to the face. The plot delivers few real surprises, just a slow, predictable realization of the main cast’s self-destructive tendencies. Only once or twice throughout did I feel like the show truly impressed, most particularly with a nighttime classroom scene towards the midpoint that might as well have been a trailer showing off what the animation and music teams could do with their unique approach. Otherwise, The Flowers of Evil is generally a muddle that seems to want to make a point before it quite understands what that point actually is.