A different house of leaves 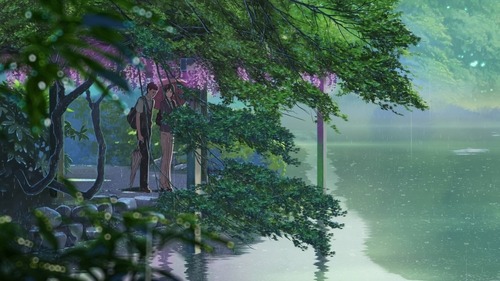 One of my biggest frustrations with Makoto Shinkai’s earlier work, Voices of a Distant Star especially, was how Shinkai always looked to be in some inexplicable hurry. With more emotionally resonant scenes, in particular, he tended to cut away before the images and words had gotten a chance to fully sink in. Even when he was at his most adept in 5 Centimeters Per Second, I still found myself wishing that he would let his settings and characters breathe a little, especially given how stunning his visual depictions were.

The Garden of Words does not, strictly speaking, fix this problem. The first twenty minutes of its forty-five-minute run time positively fly by, really, as Takao Akizuki goes (or doesn’t go) to school, watches his family drift apart, and strikes up a relationship with a mysterious older woman he meets in the Shinjuku Gyoen gardens. For the first time, though, this fast pace seems to be exactly what Shinkai is aiming for. Combined with the ever-impressive animation that is his trademark, the first half forms a tight yet beautiful expression of the whirlwind that is falling for someone else. Indeed, the whole film plays out as if Shinkai is developing his own peculiar art form, that of packing straightforward emotion into an ever more densely-written shorthand, and looked at from this angle, it’s hard not to call The Garden of Words an unqualified success.

This approach does, of course, have its downsides. Shinkai’s aggressive distillation of his premise to its most basic elements will leave not a few viewers wanting for something more ambitious. However, after the mild disappointment of his previous feature-length, Children Who Chase Lost Voices, which consciously tried to reach for a epic scale, this may have been the movie that Shinkai needed to make. When it comes down to it, The Garden of Words is a powerfully concise assertion that no one else can beat Makoto Shinkai at his own game.

P.S. Kana Hanazawa continues to impress as she expands into roles that I never would have thought could fit Nadeko Sengoku’s voice actress.