I thought about writing a long post excoriating Guilty Crown for having a plot with the strength of wet tissue and characterization that takes more 180-degree turns than a mountain highway, but I can’t justify the effort to myself. That’s fine by me, because I think there’s one image from the final episode’s closing credits that adequately represents everything wrong with the series: 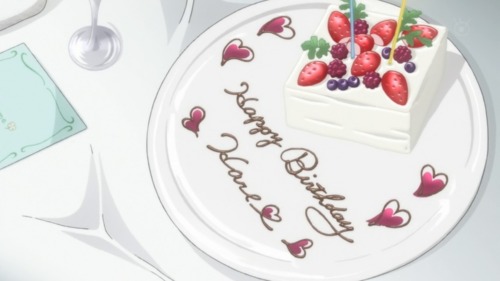 Hare. She spends the first half of the series, like pretty much all of the characters, being mostly inconsequential to the plot. She wasn’t fleshed out nearly enough to make her death have any emotional impact, but it still catalyzes Shu’s over-the-top change into an unsubtle tyrant. Then she’s mostly forgotten about until the end of the series, while Shu goes on and on about Inori having been the only person who was “there” for him through thick and thin. Her story gets wrapped up with a single shot of a birthday cake with her name on it, which screams “token gesture from the writers to reassure you that we didn’t forget about her, oh no!” The sad thing is that I actually kind of liked her character. At least she died before she could get dragged through the mud like Arisa. Yes, let’s go and turn our ineffectual but sympathetic leader into a star-struck traitor willing to sleep around for information. That makes total sense.

I was hoping around the midpoint of the series that someone would throw a real wrench into the story and turn it into something less generic. After all, Hiroyuki Yoshino did the screenplay for Mai-HiME, too, and that started off as a mostly unremarkable show before it pulled off a masterful twist into dark character drama halfway through. I realize now that I should have been more specific in my wishes – while Guilty Crown’s second half certainly isn’t generic, that’s only because it’s its very own brand of terrible.

(The animation was pretty. I’ll give it that.)