Whoever wins, we lose 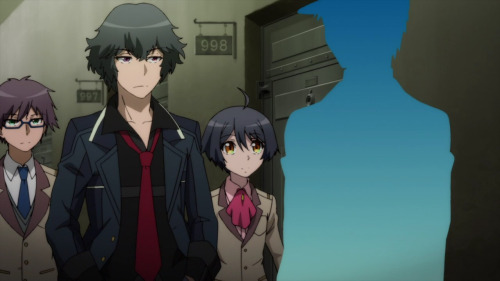 Good mystery is all about the why. Through the eyes of our detective, we probe the culprit’s motivations and the environment that shaped them. As the audience, we’re made to understand the compelling logic of the crime, even though we find it reprehensible. It may be a distorted reflection, but we recognize what we see in the mirror the story holds up to our faces.

Ranpo Kitan is all about the why, too, but in a different way, namely, “Why didn’t anyone realize this show was a bad idea?”

The show purports to be a loose adaptation of several works of Edogawa Ranpo, an early twentieth-century Japanese mystery novelist, in a more contemporary setting. This is already treading on thin ice, but it’s not a guaranteed recipe for failure. UN-GO, after all, threw an author from the same time period into an unrecognizable world, but its mildly dystopic war-torn future was constructed well enough to stand up on its own next to Ango Sakaguchi’s inspiration. Unfortunately, Ranpo Kitan brings no such thoughtfulness to the table, electing to instead pile on layer after layer of cartoonish caricature.

Let’s start with the ostensible protagonist, Kobayashi. Now, the first character we meet doesn’t always have to be likable, but they should at least be someone whose perspective we can assume to ease ourselves into the proceedings. Ranpo Kitan, on the other hand, strains to make its version of Kobayashi as obviously unhinged as possible. His enthusiasm for the morbid murder cases he’s presented with ends up being less disturbing than pathetic, as if being deliberately contrary to expectations is the only interesting thing about him. On top of this, the adaptation exaggerates the feminine features of Edogawa’s original character, which mostly came in useful for disguises, into, well, a stereotypical trap that has all the clichéd characteristics you’d expect to appeal to people who use words like “trap.” Kobayashi’s girlish looks serve no narrative purpose in Ranpo Kitan; they’re just there for occasional awkward moments between him and his male best friend Hashiba, which we’re presumably supposed to find funny.

Akechi, Kobayashi’s reluctant mentor and boy-genius investigator, is a more promising candidate for an audience proxy, and the show does start to make overtures in that direction about halfway through. His introversion is more suited to the pace of a script heavy on interior thoughts, and his weary cynicism is at least more believable than Kobayashi’s irrational exuberance. Ranpo Kitan manages to sink his chances at relatability too, though, first by giving him virtually no development throughout most of the series, and then saddling him with a ridiculous heroic backstory in the closing episodes.

All of this is dropped into a stew of metaphysical mish-mash that counts for the show’s philosophical underpinnings. Ranpo Kitan starts out by thinking up the most generic of justifications for its criminals’ actions, and then gives up on even that in its latter half by focusing on a series of copycat crimes. The dramatic presentation seems to suggest that we’re exploring the depths of human depravity, but the villains offer nothing to shake us to the bone. Most of it is just a rehash of the old refrain on the place of vigilantism in the face of injustice. What’s left are tedious attempts to shock us with out-of-place bit characters like one imprisoned acquaintance of Akechi’s, a literal masochist who contributes very little to the story except for gratuitous bondage imagery.

In spite of how self-evidently crazy this all is, Ranpo Kitan spends a lot of time trying to take itself very seriously indeed. Director Seiji Kishi’s flair for the absurd and darkly comic, put to such good use in Humanity Has Declined, only compounds the problem here. Each murder victim’s autopsy, for instance, is presented by a gag character who looks like she’s taken a wrong turn on the way to her audition for a Japanese variety show and otherwise plays no role in the story – until, of course, in a “shocking” twist, she does. Was anyone asking for this?

The show’s sole saving grace is its fantastic opening and ending themes, which thankfully have little to do with the rest of this mess.